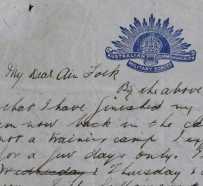 The digital collection John Robertson Hawke: World War I letters and artifacts has been created by the University of Wollongong. John Robertson Hawke (1890-1965) was a Scottish immigrant. He worked as a warehouseman before joining in 1915 the Australian Army. He fought in Egypt, France and Belgium (Ypres). He performed in particular communication tasks as a signaller. The collection contains two postcards and 200 letters, mainly written to his parents and family, a pay book and a field medical card. There is a collection guide (collection D55; PDF).

In a second collection you will find letters, postcards, documents and objects from and about another Australian soldier, William George Abate who was killed in action in 1917. 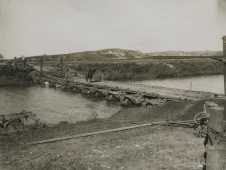 The digital World War I British press photograph collection is a project of the University of British Columbia Library. In the 1930’s the British consulate in Seattle gave the University of British Columbia some 6,000 photographic prints. The originals are kept at the Imperial War Museums. During the First World War the Photographic Section of the Ministry of Information and other governmental agencies released photographs for use by the British press. In most cases the names of the photographers are not given. The digital collection contains nearly 3,700 photographs showing in particular the ordinary soldiers, but also for (foreign) commanders, aristocracy, weapons and training.

The filters for selecting particular items do not work as expected, but in the general advanced search mode of the digital collections of UBC Library you can preset the collection and add search fields at will. You can set the order of presentation, and choose for a list view, thumbnail or detailed view. A large number of photographs (1,233) was taken in France, but other countries are to be found as well.

The portal The Battle of Jutland Centenary Initiative has been created to commemorate in 2016 the naval battle of May 31-June 1, 1916 between the British Royal Navy and the German Hochseeflotte off the Danish coast. At its center are a 25 minute animation video showing the actual battle, its background and impact, and the new study by Nick Jellicoe, grandson of the British naval commander admiral Jellicoe. The portal has databases on the ships and their crews. There are maps, teaching materials and sources, and a detailed web directory for the naval history of the First World War. In a crowdsourcing project the public is asked to help decipher and translate fragile German books dealing with the Battle of Jutland printed with the Fraktur type. The website can only be viewed in English.

The Battle of Jutland Centenary Initiative

The digital gallery of First World War ‘Official Photographs’ has been created by the National Library of Scotland (NLS), Edinburgh. This collection with some 4,000 photographs is originally part of the Douglas Haig papers (NLS, Acc. 3155 and MSS. 28001-). The digital collection has been divided conveniently in a number of sections, for example images of Field Marshall Earl Douglas Haig himself, the British Western Front, royal visits, images of the British cavalry, of the allied forces, and images created after the Great War. There are also photographs of Germans and images taken in Germany. You can browse the images, use a simple search with a free text field or the advanced search mode.

The NLS has also created a Flickr gallery with nearly 2,000 World War One Official British Photographs. The University of British Columbia has digitized 3,860 images from a similar collection in their holdings.

The virtual exhibition Experiences of war: The Jock, the General and the Nurse has been created by the National Library of Scotland, Edinburgh. This online exhibition looks at three very different persons and their experiences during the First World War. The “Jock” is the nickname of the ordinary Scottish soldier, here represented by lance corporal George Ramage of the Gordon Highlanders. You can read fragments from his diary (NLS, MS. 944-947). The general of the exhibition is Douglas Haig, the commander of the British Army. With nurse Mairi Chisholm you meet the wounded and dying soldiers.

The Chisholm Papers (NLS, Acc. 8006) can be supplemented by records kept at the Imperial War Museums. More on Douglas Haig can be found in the Douglas Haig papers (NLS, Acc. 3155 and MSS. 28001-). Photographs from this collections in the holdings of the NLS can be found in the digital gallery of First World War Official Photographs. The NLS has also created a Flickr gallery with nearly 2,000 World War One Official British Photographs.

Experiences of war: The Jock, the General and the Nurse

The website of the Imperial War Museums (IWM) brings you to the five locations and the various collections of one of the world’s largest war museums. Apart from the main museum in London there are branches in London-North, the Churchill War Rooms and the HMS Belfast in London, and a branch in Duxford. The website provides you with detailed information about the collections, research, exhibits, and educational activities. You can search the collections online with a keyword search or for particular objects, ranging from letters, diaries, interviews, images – including stereoscopic photographs in original formats – and books to aircraft, weapons and toys. For some 90,000 items of the total of 800,000 items you will find digitized materials. Some sixty concise illustrated dossiers on subjects related to the First World War help placing objects in their historical context. The IWM portal has a special section on the centenary of the First World War, and the IWM is also the leading institution of the British First World War Centenary portal. In July 2014 the main museum reopens with a new First World War gallery.

The IWM has also created an online database for searching among the 60,000 war memorials in the United Kingdom, Another IWM website concerning the First World War is Operation War Diary, a project dealing with digitized unit diaries in cooperation with the British National Archives at Kew. At Flickr the IWM is present with Faces of the First World War, photographic portraits of soldiers and officers. Lives of the First World War is a project to bring materials together about daily life between 1914 and 1918, with both items from the holdings of archives, libraries and museums, and items presented by the public in a crowdsourcing project.

The website of the Commonwealth War Graves Commission (CWGC) has been developed to provide an online database for soldiers from all countries belonging either to the former British Empire or to the British Commonwealth who were killed during action in 153 countries around the world, and to search for particular cemeteries. You can find information about 1,700,000 people and some 23,000 cemeteries. The website has a section with articles about some of the battlegrounds of the First World War. The CWGC was founded in 1917. There is a page with information about similar organisations in several countries and their websites.