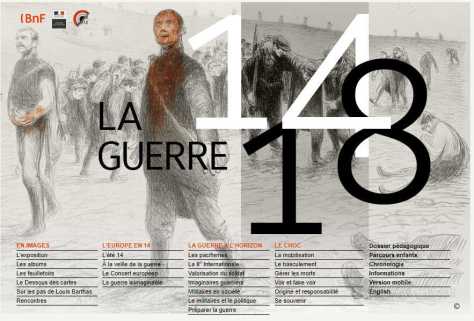 The virtual exhibition La Guerre 14-18 has been created in 2014 by the Bibliothèque nationale de France on its subdomain for virtual exhibitions. The exhibition has four sections. In the first section you can look at various images, including posters and modern photos of places mentioned in the diaries of soldier Louis Barthas. The second section, L’Europe en 14, looks at the situation of Europe in 1914. The third section, La guerre à l’horizon, concerns pacifists and social movements, and the role and image of the military in 1914. The fourth section Le choc looks at the impact of the outbreak of war on an European scale developing into the Great War. The exposition is accompanied by a section for educators, with for example a chronology of 1914. This exhibition can be viewed in French and English.